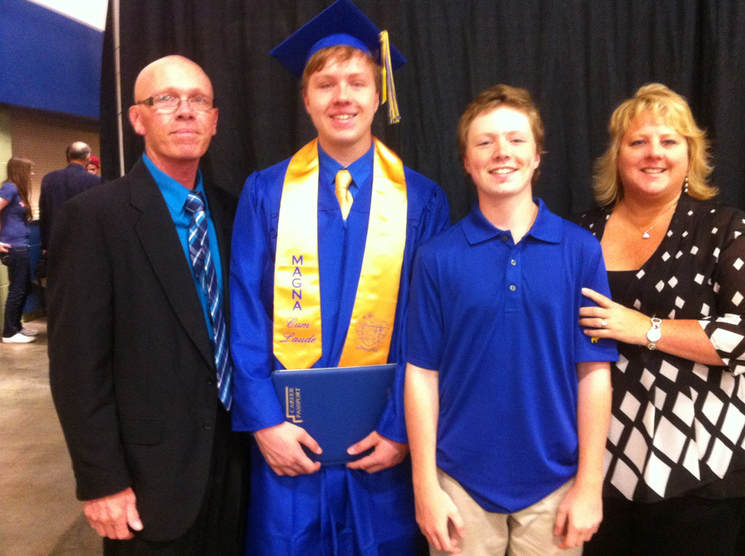 Written By: Jodi Bieniek
“Mom, something’s wrong with dad”.  Those were the words spoken to me by my 16 year old son as he woke me up from a sound sleep, 596 days ago. It was a Wednesday morning and my alarm was set to go off in about an hour to take my husband to the oncologist for a check-up to see if his new chemo drug was working.  The drug was the latest and greatest and he had been on it for a week and we were so hopeful that this one was going to give him more time than even the doctors thought possible. I ran upstairs to find my husband of 23 years wavering between standing and falling.  He saw the frightened look on my face and gave me one of his huge, bright smiles before saying “I’m alright, no worries here”, right before he toppled into his arm chair.  That was his style, “never let ‘em see ya sweat”.  He did everything he could to keep me or anyone he loved from worrying about him.

It all started 9 years earlier when I noticed a mole on his side that was getting larger and appeared to be splitting in two.  In his usual fashion he told me not to worry, so I did what any dutiful wife would do…..I took a picture of it on my camera and printed it on paper (no I-phones at that time).   I just happened to have an annual dr. appt. that week, which I truly believe was an intervention from God, so I took it to show him and he immediately said “get him in to see a dermatologist”.  Since my husband was obviously using the strategy- if you don’t look at it or talk about it, it will go away, I made the appointment for him. Fast forward 9 years, the skin-cancerous mole that we at first thought we had “caught in time”, had gone into his blood stream and was making a bee-line for his brain.  He’d survived rounds of chemotherapy and radiation, loss of hair, massive weight loss and yet somehow still had the strength of a lion.  He tracked his steps with a fitbit and managed to get almost 10,000 steps every day - walking in the mall with his mom became a daily routine!  By the way, that is waaayyyy more than I was getting per day.  When the dr. told him he had 6 months to live, he refused to accept it because that meant he wouldn’t live to see our 18 year old son graduate high school or our 16 year old son play another season of high school baseball.

Thankfully his tenacity paid off…his 6 months to live was by then going on 14 months when his chemo drug stopped working.  He was prescribed a new one and we were hopeful he might even get another year with us.  God had other plans. When I drove him to the doctor appt. that morning, little did any of us know that he would never come home again. He suffered a seizure in the doctor’s office, was routed to the hospital for 2 days and then moved to Hospice to peacefully pass away 8 days later.

People ask me how I’m doing or how the boys are doing. They tell me that they don’t know how they would handle it and that they think I’m so strong.  I don’t feel strong. I miss him every day and I cry almost every night...in fact I’m crying right now as I’m writing this.  But if I had to do it all over again and marry him knowing the outcome, I would.  I focus on the 25 wonderful years we had together and every day I still catch glimpses of him in my sons.  I’m so proud of the journey we have, thus far, made it through. God’s strength is everywhere and it continues to amaze me how He held me up when I expected to be crumpled on the floor in a ball, unable to go on.

We will never forget or be completely healed from our loss, but my sons and I know that we experienced a wonderful husband/father for many years and that’s more than many people will ever be able to say.  This experience has taught me to lean on the Lord when you’re weak and He will give you strength and to enjoy life to the fullest, because you never know when God decides that it’s your time to come home.

​How I Met The Author
I was blessed to meet Jodi Bieniek when my husband started his new role in Toledo (the first time... lol). I was even luckier to be able to work with her on a few projects when I also started working for the same company. As I sat to think about what I could say about Jodi, the words that kept coming to me were... "Heart of Gold". Have you ever met someone that you genuinely enjoy being around, that brightens up your day through and IM, email or phone call and who honestly cares about people... well then you know what it means to be friends with Jodi. The craziest thing to me is that Jodi has been this way before and even after suffering such a great loss... a loss that would have tested my hope and even my faith in God. In today's world its getting harder and harder to find people that put other before themselves daily... I thank God that he has placed Jodi in my life to remind me to treat others as I would want to be treated...with a truly Golden Heart.
SHARE YOUR THOUGHTS about this post
Proudly powered by Weebly