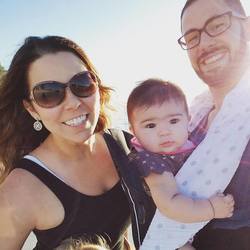 Written By: Alissa Jo Reyes
“Perfectionism is a twenty-ton shield that we lug around thinking it will protect us when, in fact, it’s the thing that’s really preventing us from taking flight.”  Brené Brown

I am a recovering perfectionist.  For as long as I can remember, I suffered from perfectionism.  One of my earliest childhood memories is feeling frustrated that my stuffed animals wouldn’t line up perfectly in a row, I think I was two.  I remember my third grade teacher telling me I was the only 9-year-old she’d ever known who made daily to-do lists.  In some ways, perfectionism has given me many gifts: a successful career and an accomplished education.  The dark side of perfectionism made me high-strung and often riddled with anxiety.

I remember the day I stopped striving for 100% perfection.  It was the Wednesday on my first week back from maternity leave.  As an HR Director, I put incredible pressure on myself my first week back.  I was coming back to an organization that had just undergone a massive reorganization and our leadership team was finalizing the annual operating plan.  I HAD to meet with each of the eight employees on my team.  I HAD to meet with each of the Vice Presidents.  I HAD to attend every Op Plan meeting to ensure the human capital strategy was included.  This led to Wednesday.  On this particular day, I had seven hours of back-to-back meetings.  I was still pumping every two to three hours but on this day, I convinced myself that if I were going to continue on in my role, I needed to train my boobs to wait longer between pumps.  By hour five, I literally thought my chest cavity was going to explode, propelling milk over the entire executive team.  I started to envision the Marshmallow Man from Ghostbusters blowing up all over New York City.  I was in so much pain, I excused myself to pump.

That evening over dinner, at 11pm after we got Lucy to bed, I told my husband I was going to ask my boss for a demotion the very next morning.  I mean who was I to think I could continue on in my role managing people and supporting a $250M+ business while also being a new mama who needed to be hooked up to a pump every couple hours?  Thankfully, I married someone who balances my irrationality with logic.  In a nice way, he explained that if I wasn’t such a perfectionist, things would be easier for me.  For once, I listened to him. During my 3am pump session that night, I had an epiphany.  I was actually doing a pretty good job, not perfect but good.  I had to stop being so hard on myself.  I promised myself I’d start striving for only 80% perfection because given everything on my plate, 80% was good enough.  It has been four months since that decision and my mindset has completely changed for the better.

As an employee, 80% perfect does not mean I work less hours, though I am more likely to sneak out early on a Thursday for a happy hour with my husband before picking up our daughter.  It does not mean I am less committed or less creative or a worse leader.  It means I don’t need to make the All Employee Meetings charts perfect, it means I don’t have to re-read an email 50 times before I send it out, it means delegating to my team and trusting them to do what’s needed even if it’s not the way I would have done it.  At work, 80% is actually making me significantly more productive.  I am tackling bigger and better projects such as reducing my business’s $4.5 million overtime expense and developing the new college hire on my team.

As a mom, 80% perfect doesn't mean I care 20% less.  It means that sometimes we turn off the brain-stimulating classical music and make fart sounds instead because farts make Lucy laugh.  It means not changing my baby out of her pajamas all day Saturday because we had a lazy fun day together.  It’s forgiving myself when we have to supplement formula because I didn’t pump enough.  It's forgetting to give her Vitamin D drops for two weeks then rectifying the situation with an impromptu family vacation to Florida.  It’s having an 80% (err 60%) clean house and picking up take-out three times a week because I’d rather spend my time playing with my daughter than cleaning or cooking.

When I gave up the additional 20%, I gave up being exactly right for being good enough, I gave up immaculate for a little messy, and I gave up the self-defeating obsession with everything being perfect… for happiness. ​
How I Met The Author

Alissa Jo Reyes and I met when she started working at GE. She was going to be taking on some of the clients that I previously supported and my role was to help with her transition. I learned very quickly that she is Super-Human. The best way to describe Alissa is to just picture J. Howard Miller's "We Can Do it" poster... she's the woman flexing. The best thing about working with Alissa is that she is equally sweet as she is smart and talented. I could always count on her to lend a helping hand if my load was too heavy or just listen when I wanted to complain. Either way, I was always greeted with her cheerful voice on the other side of the phone and a "Don't worry I got it" attitude.  Being around her made me want to step up my game just to be a better teammate. I am so grateful to have met her...to me Alissa is 100% SuperWife, SuperMom and SuperWoman.