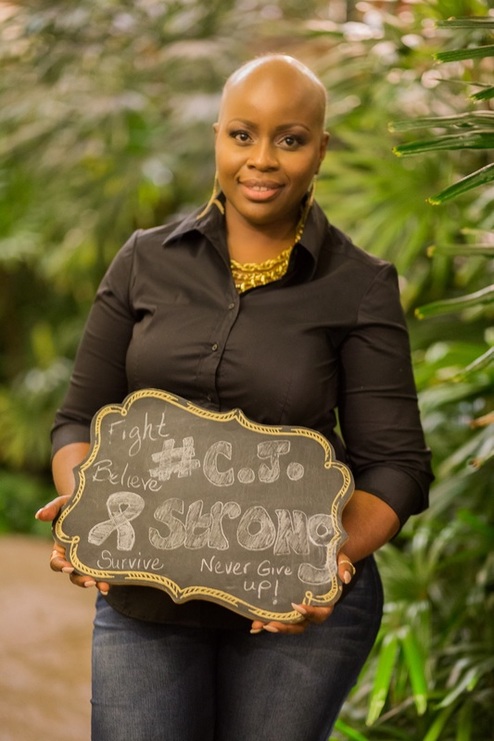 TOGETHER WE FIGHT, BELIEVE & SURVIVE...

Written By: CJ Colas
My story started when I noticed a slimy pink-thick discharge in my underwear back in April 2016. I wasn’t concern because I had Mirena (IUD) inserted two years prior and my OBGYN mentioned at the time that I would notice a light menstrual cycle from time to time. When I noticed the pink-thick discharge I assumed it was normal. After several weeks, the pink-thick discharge never went away and I noticed it was getting darker. At the end of May 2016, I scheduled an appointment with my OBGYN and after seeing him he recommended birth control pills to regulate my menstrual cycle. After two months on birth control pills, my bleeding started getting heavier. (I still had my IUD). I called the doctor and schedule another appointment in July 2016. During that visit, I got a vaginal ultrasound, and a pap smear done. He also recommended that I stay on the birth control pills. He told me my ultrasound showed that I had some fibroids that had grown bigger and he wanted me to follow-up in three weeks and I got a call back the next day stating my pap smear was okay and it came back normal.

I went home with the heavy menstrual or bleeding and waited for my three-week appointment. During my wait, I noticed I was tired and I can tell I was becoming anemic. I got very week and tired, I was cold all the time. I used a heater in my office all the time, and most of my coworkers thought it was too hot when I was really comfortable and I slept with a thick, heavy blanket and it summer. I realized I was using bigger pads, and using them more often than I ever did before in a day, and I was having blood clots. My appointment was Monday, August 22nd, 2016, I left work early and had plans to return to work that same day. When I got to my appointment, my OBGYN wanted to check me again to determine why the bleeding didn’t stop or why it was getting heavier. He was checking as if he was doing another pap smear, but this time when he was checking I was gushing blood like a faucet. He said I had a lot of blood clots and wanted to do a DNC to scrape the blood clots and that would eventually stop the heavy bleeding. He scheduled me to do the DNC on Tuesday, August 23rd, 2016, the very next day.

That Tuesday morning at about 6:30 am; my husband and I took my two-year old son to daycare and headed to the hospital since my appointment was at 7:00 am. We knew it was an outpatient procedure and assumed we would be out at least by 1:00 pm. After I arrived at the hospital, I registered, and prior to my procedure the nurse called me to do lab work. While we waited on the lab results, the nurse had me in a room and prepared me for anesthesia. While in the room, the charge nurse came and told my husband and I that my lab results shows I was pregnant. We were shocked and I felt like something was wrong because I had an IUD inserted for two years, plus my OBGYN had given me birth control, and three weeks prior I had an ultrasound which did not show a baby. I was scared. The nurse took more blood work and wanted to redo the lab to be for sure. The results came back the same way. I finally saw my doctor and he said he would admit me and wanted to do a CT scan to see where the baby was in my body or if it’s even an actual baby. It was about 3 pm when I finally got a room ready and I told my husband to leave me at the hospital and to go pick up my two year old son. Later that evening at about 7:00 pm I did the CT scan and I had to wait until the next morning for my doctor to read the results to me.

Wednesday morning August 24th, 2016, at about 7:00 am, I got a call from my husband wanted to see what time I would be released. I told him to go to work and I would call him to pick me up once the doctor tells me the CT scan result. At about 9:30, the doctor came into my room with another doctor and a nurse and his assistant. My doctor is usually a cheerful, always smiling, and an overall happy person. When he walked into my hospital room, I saw sadness in his eyes. His face looked as if he wanted to cry and I immediately knew he had bad news for me. He first introduced me to the other doctor and told me he was an oncologist and the nurse was his assistant nurse practitioner. My heart was racing at a100 mph when he said oncologist. He told me he saw cancer in my CT scan which spread to my lungs; he also wanted to do another scan to see if it had spread anywhere else. After I heard the word “cancer”,  my world stopped, it paused, I wanted to cry but I couldn’t, I wanted to scream, yell, reverse time and change some things, but I couldn’t and I had no control. I remember my doctor hugging me and said he will pray for me. I was still waiting for him to say, “don’t worry, you will live and we will take care of you”, but he didn’t say that. He did not give me any hope. I felt like it was over for me. I asked him how long I was going to live. He couldn’t answer me, all he said was I need to run more test.  This was the worse day of my life. All I can think about was my son and how I wanted to be here to raise him. Then both doctors left me in the room with the nurse. The nurse started crying and hugging me, telling me she was going to pray for me. I just knew then, I was going to die after seeing her cry.


Telling My Family I Had Cancer

I remember calling my husband to tell him I had cancer about an hour after out, the very second he answered the phone, I started crying. The tears came out of nowhere. All I heard on the other end was silence, and then he told me he was on his way to me. He left work and immediately came to the hospital. I honestly can’t remember when he got there, it seemed like I looked up and my husband, my brother-in-law, and my sister-in-law were at the hospital with me.  I honestly can’t remember when my family got there. It was weird; it seemed as if they magically appeared in the room with me. When I saw my husband, his brother, my sister in law in the room, it was early morning and they all looked worried. My husband looked as if he was crying before coming into my room. My sister looked really sad, she wanted to cry but she held her tears from me, I could tell by the look on her face. I knew then it was very serious.

After I found out about cancer and had just two days to process the news, I had to have an emergency surgery (hysterectomy) to prevent the cancer from spreading further because the cancer had already spread to my lungs. I stayed at the hospital for another 9 days. During my days at the hospital after surgery, they were the hardest times of my life. I was in a lot of pain, and I was dealing with the fact that I had cancer. I missed my son, my husband, my bed, my home and even working. I couldn’t deal with the fact that I had cancer. I felt like I was going to die and everything that was important to me seemed to be nothing anymore, the only thing that mattered was my life, my son and husband. My surgery was painful. I couldn’t cough, laugh, or walk the ways I wanted. It was afraid to take to pain pills because I didn’t like how I felt when I took it, plus I didn’t want to sleep. I was afraid to sleep because I felt like I would have missed out on something important, or maybe I just wanted to be awake to monitor everything around me.Chemotherapy started two weeks after I had surgery.

​My story is just getting started… 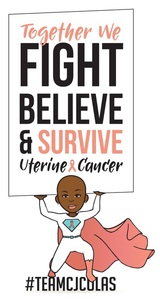 Follow CJ  as she  fights and believes her way to victory: www.teamcjcolas.com.
On this page , CJ  provides more information to help educate others about Unterine Cancer .

I encourage you to join CJ in her fight by leaving warm comments on  this  post, her website,  with prayers or donations to help her continue to  battle Uterine Cancer. Every little bit counts. Her  Go Fund  Me page is: https://www.gofundme.com/cjs-medical-expenses?r=75234
How I Met The Author

Back in October, a good college friend reached out to me and said... you have to meet CJ and have her write a post for your blog. After she connected us through Facebook, I realized that CJ was connected to my little cousin... this was an odd connection to me so I had to ask how she knew him. This conversation helped me realize how small this world really is. We actually share the same cousin and we were both Junior Bridesmaids in my Aunt's wedding... all of the memories came rushing back to me. Just like that... CJ was no longer a new connection; instantly she became Family. Although we've only reconnected recently, it feels like I've had her in my life forever. I pray for her daily and her posts encourage me to live and appreciate every moment. The way her family and friends have rallied around her is a testament to how Amazing she is. Today I call this Wonder Woman "Fighter" but in 2017 I am believing that I will be calling her "Survivor" .