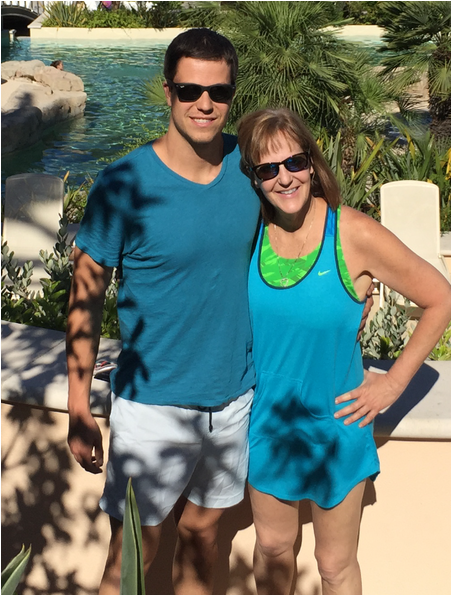 Finding Joy in the Fight

Written By: Gail Culberson
​I was honored when Manny asked me to write an article about breast cancer awareness for her October blog, as I’ve never taken the time to sit down and write about my experiences 23 years ago.  It’s particularly timely and meaningful to me because my anniversary of being diagnosed is only 3 weeks away—and at this time of year I like to think about the road I’ve been down and where I am today.

In November 1993, I was nursing my 8-month old baby, Stephen, and when his hand touched my breast, something felt “weird”.  I talked to my husband (a physician) and he suggested it might be a milk duct clog, but I needed to see my doctor soon to confirm what it was.  I was able to quickly get an appointment on an early afternoon.  I recall wheeling my baby in his stroller into the doctor’s office for what I had assumed would be a short appointment, but after a several (5+ hour) appointment, including a visit with my gynecologist, a mammogram, an ultrasound and a rush appointment with a breast surgeon, we headed home with plans for me to have surgery 12 hours later.  They found a mass on my left breast; they would go in and remove what they found the next morning, including having a mastectomy if the doctor felt it was needed….so going into surgery I did not know what to expect when I woke up.

Some of the things I recall from that long afternoon, the evening preparing for surgery, and immediately afterwards:I ended up having the mastectomy, 6 months of chemotherapy, and one additional experimental treatment which was so intense that I opted out of 3 other planned treatments.  My greatest fear was that I would die and my son wouldn’t remember me.  My greatest disappointment was having doctors tell me that I should not have any more children; that during my pregnancy, my hormones went ape-shit.  (Don’t think that was the terminology they used but you get the drift).

During this timeframe I learned first-hand lessons from the kindness of others about how to support people—e.g., a work colleague whom I’d not yet met who offered to babysit for Stephen; a stranger who had heard about me from a mutual friend bringing us dinner (with a promise to bring dinners on Thursdays over the next several weeks); cards, letters, and pick-me-up gifts from people I hadn’t heard from in years.  Fortunately, my bosses and co-workers were very supportive throughout my entire journey.

People asked how I managed to return to work and care for my son during this time.  It felt “normal” to work again; and I had to fight to stay alive to raise my son.  I remember being tired a lot, and just rocking my baby, holding him as much as I could.  I relied on humor; I particularly enjoyed sending several select friends on wild goose-chases to see if they could find me a “merkin” without explaining what it was; only that I had heard that cancer patients need them. (I’d heard that it was a “rug” for pubic hair—the perfect gift for the chemotherapy patient who has everything--except hair).  My favorite response was from a dear friend, who once I told her what it was, said NOW she understood why the American Cancer Society wouldn’t answer her phone messages when she asked for return calls to discuss where she could find a merkin!
​
Years later when genetic testing became available I learned that I’m a BRCA1 carrier, so I opted for elective surgeries to try to fend off ovarian cancer (also related to the BRCA defect) and a future breast cancer, along with several reconstructive surgeries to try to put humpty dumpty back together again.

I think it’s as hard to watch someone you love be sick as it is to battle a disease yourself, because you feel helpless.  What can you do to support people who get sick?  My advice would be not just to offer to help but to see if you can ‘take charge’ a bit, by asserting yourself (e.g., asking if it would be ok to bring dinner on a specific day), sending cards/texts/emails, offering to accompany the person to their appointments, sending a scarf or earrings-something to make the person feel pretty while they are without hair/body parts, or fun socks to wear to keep their tootsies warm.  Then take the patient’s cue to see how they receptive they are to your kindness.
I’m grateful to God and my support crew to be alive, and to have had the opportunity to watch my son become a man.  He definitely won’t forget me (even if he wants to!).  I’ve seen survey results which indicate that cancer survivors’ quality of life tends to be higher than the general population; I understand that--I’m appreciative of every day, choose to be surrounded by positive people who share this gratitude, and I no longer have bad hair days.  At least I have hair!
How I Met The Author

In the corporate life, its sometimes hard to find people that care about you beyond the work day. Fortunately for me that was not the case when I walked into a completely new environment and stepped into my new bosses office. In every possible way, Gail wanted me to win and I could see the genuine care in her eyes when she would give me advice on anything from how to get my presentation just right to playing the best prank on someone (i.e... pooping Penguin for Christmas gift exchange). Beyond the office, the most important thing that I learned from Gail was that family always comes first. No matter what was going on in the office, I always admired how she made sure that her son was top priority. To see him accomplish so much in life is a testament to who she truly is... "A beautiful woman living life to the max with an open heart filled with love, light and always humor".